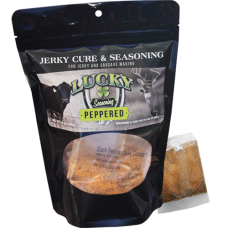 Lucky Beef Jerky Seasoning & Cure kits allow the user to create great tasting jerky at home with nothing more than a knife, cutting board, mixing bowl and oven.  Black Pepper flavor creates a deep, rich flavor that is a great accent to your favorite meat.  It works great on everything from ducks to lamb.

Ever since we started making beef jerky commercially, folks have been asking us for an “DIY jerky making kit”.  We were listening.  The other thing that we also heard from nearly everyone we talked with about jerky kits was that they were too complicated and there was too much to measure out.  We worked with the folks who create our commercial seasoning blends and worked out a very simple, very effective method for making jerky.

Simply dissolve 1 cure packet and 1 seasoning packet in 1 cup of cold water.  This will create a marinade.  If you’re making traditional “slab jerky” allow the meat to marinate for 24 to 36 hours.  If you’re making ground and formed, simply mix the marinade with ground, lean meat and extrude onto drying racks and cook per the instructions included in the kit.

Original flavor is a variation of our “Signature Steak Seasoning” that has been reformulated for jerky.  It’s a bright, crisp flavor that will wake up your palate without lighting a fire.  It’s safe for women, children and sensitive folks.

There are no reviews yet.